skip to main | skip to sidebar

What Community Means To Me 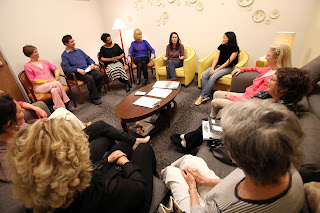 For about five months now I've been obsessed with "community"-what it is, what it isn't, which ones I used to belong to, which ones I currently belong to, what my role is in them- my queries went on and on until I started looking for answers. To be honest, I would've blithely gone on and accepted it for what it was but I had a very significant turning point. During a pleasant afternoon, at a place I'd spent many pleasant afternoons, someone caused my view of community to change when they questioned my ethnicity. After a lifetime of such inquiries from members of my own race (I'm African-American), and unenlightened others, it wouldn't have bothered me if it didn't happen where it did.
During my struggle over this issue I realized why it caused me to meditate so assiduously about community. The very act of questioning someone about something so personal, and in such an insulting manner, violated my civil rights and private boundaries. Now I had to sort out for myself just what it meant to me and my future with community.
Throughout my research I found the following definition from "The American Heritage Dictionary Of English Language," "A social group or class having common interests." Lori, on www.collectiveself.com, contributed her own definition online that both touched and inspired me. She wrote, "Today, for me, community is an unexpectedly diverse and unified body of individuals who help ensure that life is surprising and delightful." I'd also like to add that a community is a place where you know you'll be surrounded by friends and extended family.
While I continued exploring the "Cancer Support Commnity-Benjamin Center's" Mission Statement kept coming back to me. Featured in the lower left-hand corner of their monthly newsletter it states, "Our Mission is to ensure that all people impacted by cancer are empowered by knowledge, strengthened by action and sustained by community."
Before I started going to the Cancer Support Community I thought I knew what community was because I'd been a member of different groups, clubs and organizations, both personally and professionally, but once I truly started interacting with the other cancer patients and facility staff there I realized how little I knew. The most important thing I've learned from them is to accept others despite race, age, lifestyle or background.
Ultimately I agree that a community can be cultural even if that culture is made up of cancer patients and their supporters. It develops the ability to alter as new participants enter and old ones leave and has the flexibility to be there for those who need it. In my case it's always with me whether I go every week or once a month.
Personally the communities I've belonged to, by birth, include female and African-American and the ones that include my interests are the writing, fashion, tap dancing and reading communities. Lately I've also become aware of communities in literature, such as "The Great Benzini Brothers" circus from the book "Water For Elephants". Besides tha main characters, Jacob, Marlena, August, Uncle Al, Walter ("Kinko"), and Camel there's Queenie, Walter's dog, Rosie the elephant, and Bobo the chimp. Set during the Depression, in the 1930s, it didn't matter that these characters weren't all related and were basically dysfunctional they were all connected by a common purpose-putting on a show!
After reading this book I finally realized my search for the meaning of community wasn't over, it was just beginning, and I was still in the midst of figuring it all out and where I fit in.

Posted by Victoria Moore at 1:10 PM No comments:

The Cancer Support Community-Benjamin Center (CSC-BC) is the founding facility of what is now the largest cancer support organization worldwide, the Cancer Support Community. Celebrating our 30th anniversary this year, our programs span the continuum of psychosocial needs from basic information sharing, education on complex cancer related topics, support groups and individual counseling, to a comprehensive stress reduction & exercise program.

Through our programs, people affected by cancer learn vital skills that enable them to regain control, reduce feelings of isolation and restore hope, regardless of the stage of their disease. All services at The Cancer Support Community-Benjamin Center are always free of charge.

Our professionally-led programs are based on peer reviewed, evidence-based research and utilize CSC-BC founder Dr. Harold Benjamin’s Patient Active™ concept. More broadly, for people with cancer and their loved ones, this concept can be called being Life Active. Being Life Active means that one takes specific steps to become empowered, to make informed decisions about one’s physical and emotional health, and to take actions to improve one’s quality of life.

Check Out CSC's Other Sites